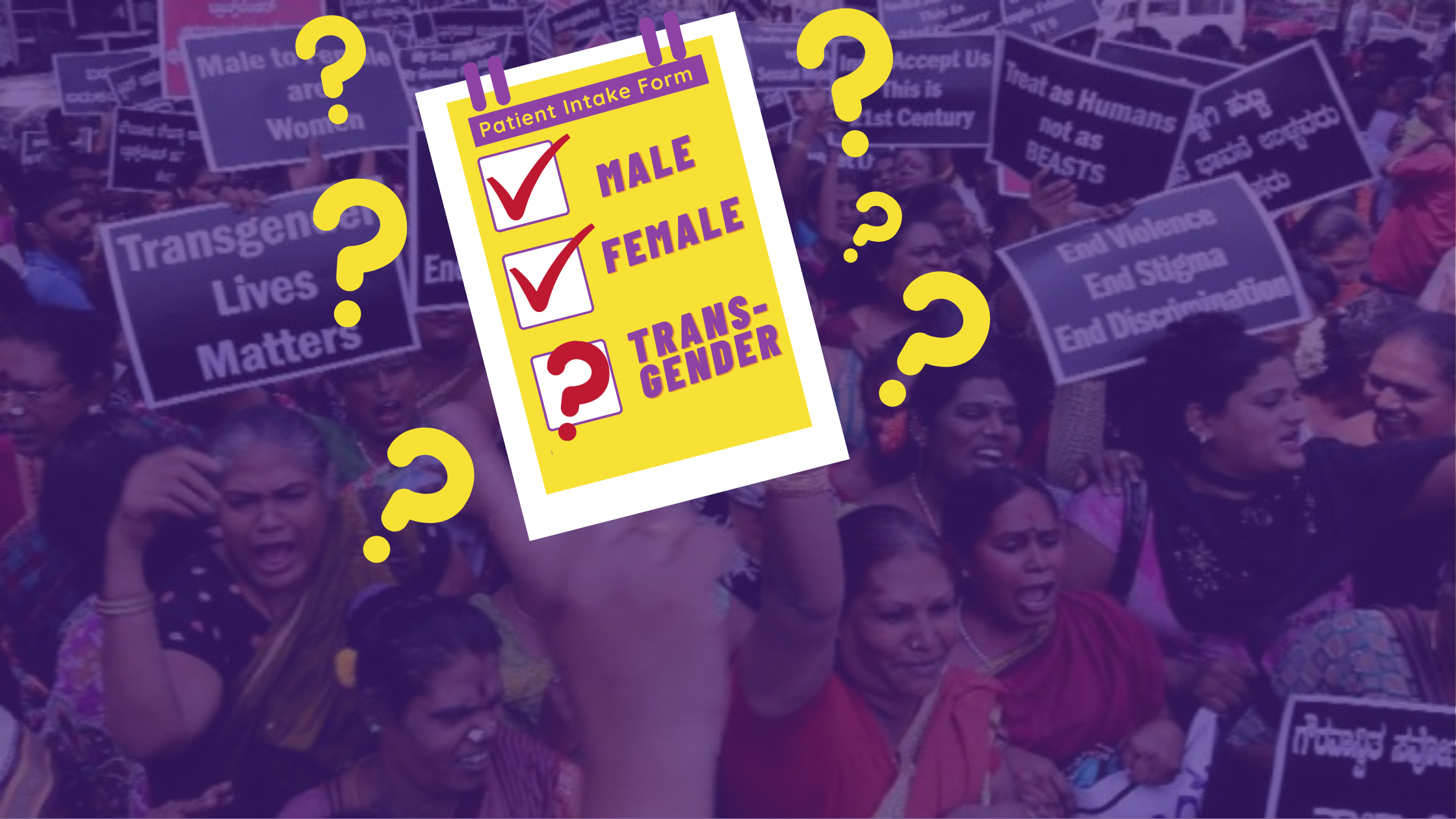 When we talk about inclusion of trans persons and their access to equitable health care services, the conversation often circles and eventually settles on gender-neutral washrooms, inclusive wards, non-discriminatory approach of the staff and much more. On the face, it appears promising. In reality, it is in a vacuum.

Much has been said, some have been done, but on this very day of 2020, there is no option for trans persons in the gender section of patient intake forms across many hospitals, health insurance companies and diagnostic labs, which forces trans persons to unwillingly misgender themselves. Most hospitals in India, have binary intake forms with only ‘male’ and ‘female’ options and a very little number of hospitals have a third category in the gender section but the number of hospitals is even less when it comes to actual trans-inclusive hospitals with trans-affirmative services.

In response to how this non-inclusivity of patient intake forms impacts trans persons in reality, Rahul*, a genderqueer transman, recalls his own lived experience,

“Forms are never inclusive, and medical processes are not, especially gynecological forms and processes. As a transman who wanted to get pregnant, it has been difficult navigating the health system which presumes such services are only needed by married cis women.”

In many cases, trans persons might completely avoid or delay seeking medical services as going through the whole process is often daunting and embarrassing. The amoral curiosity of many in the medical staff, their gaze and non-affirmative behaviour gets more validation as it is systematically institutionalised.

As Sumeet* shares, “My aadhar card still holds the gender that was assigned at my birth(female), but I am a Transman. Every time I am supposed to fill a patient intake form, I feel really confused as there are only binary options. I am passing as a binary man and that is why they often tick on the male option at the hospital but then I correct it according to my aadhar card. That again adds up to my dysphoria as a trans-person. The confusion and anxiety of how to explain and bring this up to the receptionist or in the further procedures is laboursome.“

Ironically, this labour of anticipating the process only stays with the trans individuals, whereas medical staff often can easily get away from the responsibility of educating themselves about gender issues. Their personal biases are reflected and standardised by the forms. This further perpetuates and internalises trans-negativity within systems. In many cases, they don’t even care to ask and tick on the gender options looking at the appearance of people. They tick on columns that suit their perception of masculinity or femininity—the perception that often rejects anything and everything that exists beyond binary.

The rejection and stigmatisation make trans people sensitive to subtle signs in the environment that can be read as indications of whether they are welcomed or not. The anxiety of how things are going to come up, unfold, impact always exists in lieu.

“Should I misgender myself to access services or should I just delay accessing services for my illness?”

“If I correct the receptionist, everybody will laugh at me!”

Looking Closer at the Law

As per Chapter III, 4(1) of Transgender Persons (Protection of Rights) Act, 2019, “A transgender person shall have a right to be recognised as such, in accordance with the provisions of this Act.” Chapter II, 3(d) further mandates that, “No person or establishment shall discriminate against a transgender person on any of the following grounds, (namely), the denial or discontinuation of, or unfair treatment in, healthcare services.”

And the landmark NALSA Judgement of 2014, section Article 21 and Transgenders, clause 68, states that, “Recognition of one’s gender identity lies at the heart of the fundamental right to dignity. Gender, as already indicated, constitutes the core of one’s sense of being as well as an integral part of a person’s identity. Legal recognition of gender identity is, therefore, part of the right to dignity and freedom guaranteed under our Constitution.”

Many trans persons, going through medical transition or not, might not be comfortable with binary options of Male or Female in the forms and they would want to identify themselves as “transgender” instead. This kind of forced misgendering negatively affects the mental and physical health of trans persons and may impact their future engagement with the health care system. Irrespective of the provisions in the Transgender Persons (Protection of Rights) Act, 2019, and NALSA Judgement of 2014, no affirmative action has been taken by many medical facilities so far which directly violates the fundamental rights of trans people.

If you never stumbled on the ‘mere’ gender section in patient intake forms, thank the cis centered systems that provides the default benefits. The reality is that the benefits are designed by cis people, only for cis people.

As the reality of Rahul*, Sumeet* and many other trans people lie far from this default reality, navigating through the medical services is often overwhelming. These aren’t only personal experiences solely of trans people, it is also deeply intertwined with the politics of invisibilisation of the marginalised communities, the unwillingness to create spaces for them and delaying the pace of the movement of inclusion & equality.

In Safe Access’s online research on 536+ hospitals’ patient intake forms, total 354 hospitals have only male and female options. And only 4 hospitals had ‘Transgender’ as a separate category. 184 hospitals did have a third gender category that mentions either Both/Indeterminate/Others/Ambigous/Unknown/Child/Prefer not to say/Rather not to say Intersex. This lack of uniformity further contributes to the scattering of the data, having no consolidated statistics. This gives a brief sneak peek at the gravity of the issue and landscape of the facilities when it comes to challenges with accessing healthcare services.

Making Patient Intake Forms Inclusive: The Need Of The Hour

First things first; once a hospital has trans-inclusive form, it would be easier to make other changes like inclusive washrooms, staff sensitization, how to address and treat patients, proper diagnosis without any presumptions, etc.
Patient intake forms without the transgender category further perpetuates the medical data disparity that exists due to many of the trans community choosing ill-fitting gender identity, unwillingly, thus the actual data never makes it to the medical records.
With only the binary options in the form, there’s very little to no scope of using the correct pronouns and chosen names for the trans people. The misgendering leads to self-doubt, lower self-esteem, social anxiety, delay in accessing healthcare services, and avoiding symptoms of illness/disease among them.

Having only “Gender” in the intake forms can also lead to misdiagnosis and makes it difficult for healthcare providers to correctly understand their patients’ needs. For example, a trans person, assigned female at birth but identifies as a male could select “Male” option on the form instead of “Transgender”. In such cases, it is clinically relevant to have “Sex assigned at birth” in addition to “Gender” on the patient intake forms to correctly capture the history of the patient.

Having a trans-inclusive form would make trans patients comfortable and less anxious in accessing the services as it indicates an affirmative approach of that particular hospital. This will encourage them to confidently seek medical facilities when and where needed.

The future is promising and needs responsible, informed, and affirmative actions. We can’t skip the basics and then only ideate the far-fetching scope of an intersectional future. It is time that the medical facilities recognise the value in making the forms inclusive for trans people and the hope is they will.

As individuals, if you come across any such patient intake forms, make sure that you raise concerns and voice. One way to do that is by creating an online space that consolidates all the realities from the ground. You can post the details of the hospital, a picture of the form with the #TransFormNow. You can also sign the petition to make your voice count. The signs collected through the petition would be used as a tool to engage with hospitals, insurance companies and pathology labs across the country with the demand to make changes in the intake forms.

It is our collective responsibility to make affirmative spaces, upholding the autonomy and lived realities of marginalised people, respecting and caring for each other. We are all together in this.